She is the Horse of the Chinese Zodiac. A cold, stubborn, proud, and fiercely independent woman who despises the way the other members of her clan submit to Akito Sohma, Rin is very closed-off as a result of her abusive and traumatic past. Since she was rejected by her parents, Rin lives with Kagura Sohma and her family.

Rin had a romantic relationship with Hatsuharu Sohma prior to the beginning of the series, but she later breaks up with him to protect him until she can find a way to break the Sohma curse and free him from its shackles.

In Fruits Basket Another, she is married to Hatsuharu and the mother of twin children Sora and Riku.

Rin is a very slim young woman with a light complexion, sharp, dark-brown eyes (sometimes depicted as black), and a tall stature, who is mentioned to be very beautiful. Tohru Honda mentions that Rin has a nice and voluptuous figure.

She initially has straight, hip-length, jet-black hair which she wears in a hime-cut; with long, loose strands of hair freely framing her face and evenly-cut bangs that cover her entire forehead and frame her thick eyelashes. She will occasionally wear her hair in twin-tails or ponytails when she wants her hair out of the way. However, her hair was later cut short by Akito as a punishment, in which she now sports nape-length hair which is unevenly cut.

Rin usually likes to wear dark-colored, revealing clothes, some of which have a goth influence to them. The accessories she wears are handmade by Haru. She is at times seen in her school uniform, which consists of a white tailored sweater and yellow ribbon with a black shirt underneath, a short, white skirt, long, black stockings, and brown loafers.

She also has heavy scars on her back, which she received from being pushed off a window by Akito.

Rin is aggressive, emotionally distant, jaded, sardonic, and unkind, wielding words as a weapon to keep people away from her. She is also perceptive and uses this to keep others from seeing her mentally and physically scarred. She finds it incredibly difficult to open up and bond with people, likely due to her history of abuse. She is also a lone wolf who prefers to depend on herself only, and is determined to find a way to break the curse without the help or interference from anyone. Despite her cold personality, Rin is deeply loyal and passionately emotional, and can be tremendously self-sacrificing, especially in regards to Haru, but she tries to hide it behind an aloof front. On the other hand, she is often uncomfortable with displays of emotion; reluctant to show herself as emotionally open and vulnerable, as well as being cranky and self-conscious and suffering from painfully low self-esteem.

Because of her traumatic past, she has given up on familial bonds. Hiro Sohma notes that Rin indirectly blames him for having kind parents and that she finds the concept of a loving family as "wrong". She is also disillusioned and questions Tohru Honda's optimism - not aggressively, but almost resignedly. Rin appears to dislike kind people; not because they are kind, but because it reminds herself of how weak she is and how badly she craves acceptance from those kinds of people. But exactly because of that, she avoids kind people like Tohru, since she is unwilling to let herself become a burden.

Towards the end of the series, Rin has come to depend on others more, and Haru makes her promise him that she won't ever try to do everything alone again. She is also shown to be less empathetic and refuses to forgive Akito Sohma for not only the pain she had inflicted on her, but everyone in the Sohma family. She also reveals that she'd hoped all of her pain and emotional issues would go away once the curse broke, but they didn't. However, Rin decides to move forward with people who she knows will never leave her side.

Rin's childhood up to an unspecified point was affectionate, loving and normal; when she was a small child, perhaps eight or nine going by the art, she posed the innocent question to her parents -- "are you really always this happy? Doesn't anything bad ever happen?" -- and this catalyzed a long term and severe physically and emotionally abusive relationship that continued for years until she collapsed in the street and was hospitalized. While she was in the hospital, her mother visited once and briefly in order to tell her she was no longer welcome in their home. A child of perhaps 12 years old, Rin displays behavior very typical of an abused child prior to her mother's arrival, pleading to be released so that her parents won't know that she's been hospitalized in an effort to maintain the parody of 'normal' she exists in.

Rin is then taken in by her cousin Kagura's family, and she been living there for five or six years. Despite this long-standing living arrangement, Rin was clearly unable to form meaningful bonds with the family, and her distant relative/foster sister Kagura informs Yuki that she is often absent from home and sometimes skips school.

It's clear that Rin hasn't recovered from the abuse in any meaningful way by her first appearance in the series, nor is it addressed; like most of the Sohma family's ugly secrets, it's swept more or less under the rug and she continues to exhibit classic symptoms of an abuse victim, possessed of a conviction that what was done to her was somehow her fault and if she could only figure out what she'd done wrong, her parents would someday love her again. "In reality, her only 'sin' was being born cursed, to parents who were unable to cope, and whose resentment of her outweighed their desire to fake it".

Rin and Haru were close as children and remained close as they grew; eventually that friendship evolved into romantic love, and they were clearly deeply emotionally invested in each other; they spend enough nights together that he is the only one who could be close to her while she slept without waking her, and he is used to waking her from nightmares. It's implied that they've made love at least once. Haru's inability to understand Rin's actions when she breaks up with him leads him to doubt how well he understands her, but the fact is that he was simply lacking a vital piece of information. It's clear they know each other very well.

Prior to her appearance in the series we know two important facts about Isuzu; that she has suffered something so terrible at Akito's hands that Shigure and Hatori mutually agree they cannot allow anything like it to happen again, and that she previously dated Haru. She dated Haru for some years and was deeply in love with him; when Akito learned of this she confronted and then attacked Rin, culminating in pushing her out a window some stories above the ground. Though Haru was the one who initiated their relationship and convinced Rin they should act on their feelings, when Akito asks her who made the first move, the question heavy with an implicit threat, Rin redirects Akito's wrath onto herself despite the fact that she will suffer great punishment.

This only further supports Haru's assertion to Yuki in chapter 69 that Rin "can be harsh" but won't lie to "protect herself". Indeed, she maintains the falsehood despite the truly frightening level of violence Akito directs towards her. During Rin's lengthy hospitalization she broke up with Haru, only telling him that she was "tired of him" when in reality Akito had emotionally preyed on her poor self-esteem and emotional scars to convince her that Haru was better off without her, unknowingly feeding into her earlier fears that her love would consume, hurt or drive him away.

From this point on Rin is clearly deeply determined to break the family curse and free Haru from Akito.

This section is a stub. You can help the Fruits Basket Wiki by expanding it.

Before summer vacation, Isuzu was walking around town in search of Akito Sohma and Kureno Sohma. Isuzu was not feeling well at that time and was trembling a lot.

During summer vacation, Isuzu arrives at the villa where the Sohma's along with Tohru Honda was staying, Hiro saw her..[4]

Tohru's sheets were blown away to Isuzu's location in the woods. Once Tohru finds her sheets, she meets Isuzu in her possessed form of a horse. In a humorous moment Tohru, not knowing who she really is at first, is shocked to see a horse laying there. It is then Yuki arrives and recognizes the horse as Rin. When he asks her if she needs aid she attempts on kicking him, but misses. When he is about to lecture about on kicking, she cuts him off and begins to stand. At that moment, she returns to her human form, but is completely naked in the process (while still glaring at him), which causes an embarrassed Tohru to panic, cover her with a sheet, and apologize for nothing.

Although it didn't take Isuzu long to change back, Yuki Sohma insists on getting Hatori for help, however, Isuzu rejects the help. She threatens Yuki that if he tells Hatsuharu Sohma anything about their meeting, she would kill him. As she leaves, Yuki comments on how she's quite the girl to threaten him while naked.[6]

Hatsuharu appears to Isuzu after summer vacation and talks to her about their break up. When the conversation ended, Isuzu walks up, but Hatsuharu stops her by saying it doesn't matter if he dies, and kisses her on the spot. Isuzu kisses him back but then slaps Hatsuharu and leaves. Yuki sees the scene and suggests running after her, but Haru says that it is nearly impossible for him to catch up to her when she's in determined mode.

At some point, Isuzu married Haru, having twin children Sora Sohma and Riku Sohma between them. They are stated to live in town.

The Horse of the Zodiac

Rin is cursed by the spirit of the Horse of the Zodiac. Whenever she is hugged by the opposite sex, or if her body goes through a great deal of stress, Rin transforms into her Chinese Zodiac form. Like all the Cursed Sohmas, their respective animals are drawn to them, and in Rin's case; horses. The Horse is the seventh of all zodiac animals.

Rin has black hair and brown eyes due to sharing similar traits with her animal, the Horse. Another trait she got from the spirit is that she can run very fast. According to Haru, it is impossible to catch up to her when she is determined. Rin is also depicted as stubborn and independent, to the point she cannot stand being dependent on someone else, which are traits associated with those born in her Zodiac year. In Chinese culture, Horses are free spirits who need space to be themselves, which applies to Rin very well. 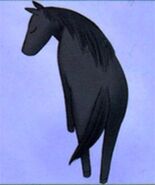 Rin's Zodiac form in the anime.
Add a photo to this gallery

When Rin's curse broke, she was subconsciously aware of it, began crying and sought comfort in Haru who was beside her, both of them describing it as a bittersweet experience. Rin's curse was the overall ninth to break.[7]

Retrieved from "https://fruitsbasket.fandom.com/wiki/Isuzu_Sohma?oldid=58432"
Community content is available under CC-BY-SA unless otherwise noted.