View source
watch 01:40
The Sandman Will Keep You Awake - The Loop
Do you like this video?
Play Sound

The Mabudachi Trio (mabudachi meaning "true friend") is a group made up of the three oldest cursed Sohmas: Hatori Sohma, Shigure Sohma and Ayame Sohma. They have been together ever since they were young, all through elementary, middle and high school. In the English dub, Shigure refers to their group as "The Three Musketeers".

In Chapter 22 (Volume Four) or Episode 13 of the first season (of the 2019 Anime), it is revealed that Ayame convinced the principal to permit his long hair (more through bluster than wit) and was student council president (though he protests Hatori would have been better-suited.)

During a class field trip, several of their classmates were caught visiting the "red light district". Ayame spoke in their defense, insisting that their interest grew from natural human impulses, and proposed as a compromise that the student body should "direct their carnal desires" at him. (Shigure notes that it was likely Hatori's intervention that kept their classmates from being expelled and allowed Ayame to continue as class president.) 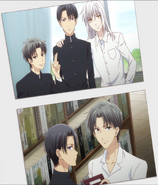 Photos of the Mabudachi Trio in their high school days.

Ayame as the student council president showing off his "sensational behavior" as Hatori reprimands him.

The Mabudachi Trio being cheered on by the student body.

Shigure and Ayame are playful with each other, peppering their conversations with jokes and innuendos (though it is possible that they do this to amuse themselves, rather than out of any romantic intentions.)

Ayame deeply respects and admires Hatori's maturity. As a result, Hatori is the only person who can order Ayame around.

Hatori chastises Shigure for his foolish remarks, but acknowledges that Shigure is far from the imbecile he presents himself to be.