Makoto Takei (竹井 誠, Takei Makoto) is a minor character of the Fruits Basket series. He was the Student Council president at Kaibara Municipal High School before Yuki Sohma, and is shown to adore and love Yuki.

He reappears in Fruits Basket Another, where he now is a teacher at Kaibara High. He is shown to adore Yuki's son, Mutsuki Sohma. 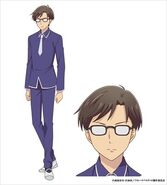 Takei's full appearance in the anime.

He is strict about the school code and would make sure that he would do whatever he takes to correct a student's wrongdoings. He tends to do everything relating to Yuki, even immediately choosing him as his successor and commenting that he would like to take back just to look at Yuki more often.

When he first appears, he yells at Hatsuharu Sohma for having two different hair colors, and despite Yuki's protests, states that it is against the school rules and it is not possible to have two natural hair colors. He continues his ranting at Momiji Sohma for wearing the girl's uniform, and when Tohru Honda attempts to help Momiji, he says that he is defending logic. By this time, Haru has turned black, and proceeds to beat up Takei, dragging him into the bathroom and presumably shows him his pubic hair.

Makoto has become a teacher at the high school where Fruits Basket Another takes place.

He is first seen scolding Sawa Mitoma for being late on her first day of school, but is stopped by Mutsuki Sohma, who he seems to have as much a crush on as his father.[1]

At several points in the series, he is shown to have a crush on Yuki, blushing whenever he is around and imagining him.

Retrieved from "https://fruitsbasket.fandom.com/wiki/Makoto_Takei?oldid=48416"
Community content is available under CC-BY-SA unless otherwise noted.