Motoko Minagawa (皆川 素子, Minagawa Motoko) is one of the recurring characters of the Fruits Basket series. She is third-year student at Kaibara Municipal High School, the president of the Prince Yuki Fan Club, and a fanatic admirer of Yuki Sohma.

Her family runs a vegetable shop, but she doesn't really help out. She once raided Saki Hanajima's house with three of her followers, looking for a weakness in her so she could get to Tohru Honda to "protect" Yuki, but her visit was unsuccessful.

In Fruits Basket Another, Motoko is married and the mother of Ruriko Kageyama, her daughter also being a fanatic admirer of the Sohma Family.

Motoko Minagawa has long, light brown hair that falls to her waist, which is always decorated with bows. She is only once seen out of her school uniform.

In manga & 2019 version, she has deep indigo blue for eyes and hair. 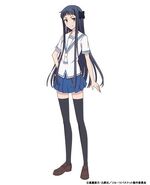 Motoko's full appearance in the anime.

She often writes poetry about her love for Yuki Sohma; she considers Tohru Honda a witch, Arisa Uotani a Yankee, and Saki Hanajima a demon. She also thinks all the rest of the members of the Prince Yuki Fan Club are evil and cruel, and she hates them, but considers herself the most evil, cruel and hated one. She has been able to find her own happiness after confessing to Yuki.

Motoko is first seen demanding to know why Tohru Honda was seen walking with Yuki Sohma, with her fellow Prince Yuki Fan Club members standing at the side, agreeing with her. They leave, however, when Arisa Uotani and Saki Hanajima arrive, with Arisa threatening with her "gangster body" and Saki preparing to use her electro-poison waves. When Tohru walks home with Yuki once again, Motoko and her friends are seen hiding, telling her, "Don't get a swelled head!"[2]

Motoko, along with Minami Kinoshita and Mio Yamagishi, decides to follow Saki home, pretending to be doing research on her powers to learn Saki's weakness so she can defeat her and Tohru to protect Yuki. When they arrive, Saki warns them not to speak their real names in the house, but doesn't tell why. When Saki leaves to make tea, they dive into her room, looking for everything personal they can find. When Motoko opens a sliding door, she sees Megumi Hanajima instead, and screams as Saki returns with the tea. Saki then invites Megumi to join them, who asks if Motoko, Mio, and Minami are Saki's new "friends".

While drinking tea, Motoko asks Megumi if he can emit waves like Saki. Although initially relieved to hear him say no, they quickly discover that he can curse people through their names, which is why Saki spoke of not saying their real names. When he asks for their names, Motoko and Minami try and leave, but not before Mio asks Saki directly if she has a weakness. When Saki confirms this, they all listen intently, but Saki redirects the conversation, revealing that she was aware of their plot. With their secret out, Motoko reveals their intentions. However, Megumi tells them that they themselves are disrespecting Yuki by acting the way they do. He then reveals that he indeed knew their names, and they run away.[3]

Motoko is revealed to be married and has a daughter named Ruriko Kageyama, who is the president of the Sohma Fan Club. It is mentioned by Ruriko that when she once spent her entire summer vacation "studying" about the Sohma family, Motoko, although she understood her daughter's devotion, asked her to take it easy.

Differences from the source material

This section contains the overall plot differences between the original manga and the 2001 and 2019 anime of Motoko Minagawa. As so, all information may not constitute canon material. Click on "Expand" to read.

Mio is one of the girls who are curious to know if there will be any females that will be appointed to the student council, since Yuki will be the student council president the following year. However, Makoto Takei denies them access to this information. They later pass by and catch a glimpse at Tohru conversing with Yuki, which, in turn, infuriates them. Motoko must think about graduation from high school as well as her resignation from the fan club. Motoko enlists the assistance of Rika Aida in order to infiltrate the student council office. Once there, they run into Yuki. They end up talking about leeks because Mokoto gets very anxious when talking to Yuki. After she runs away toward the school grounds, Yuki finds her and apologizes for what he did or said that could have hurt her feelings. Mokoto now understands how connected Tohru and Yuki are together.[4]

Although Motoko displays her leadership when accompanied by the Prince Yuki fan club, she seems very shy and much quieter when around Yuki in person. She often gets jealous of another girl being around Yuki, primarily Tohru. She does try her best to keep those feelings out of Yuki's sight for fear that he may end up hating her. Towards the end of her school year, she ends up confessing to Yuki and wishes the best for him. In the anime when face to face with him, she can only think to ask him what he had for breakfast, despite wanting to confess her love for him. She also is very nervous, stutters and talks very fast around Yuki. However, at the end of the episode she tells him she is not going to give up on him as long as there is hope and walks away from him without looking back.

At first, Motoko considered Tohru a witch because she refused to believe that Yuki loved any girl other than herself. After her second real talk with Yuki, she saw him smile and realized that it was because of Tohru that Yuki could smile like that. They then walked away, declaring that if any girl was worthy of Yuki's love, it was Tohru and Tohru alone, and that one day she hoped to be worthy of Yuki's love as well. Even though Motoko does not like Tohru, she still has respect for her.

Retrieved from "https://fruitsbasket.fandom.com/wiki/Motoko_Minagawa?oldid=48481"
Community content is available under CC-BY-SA unless otherwise noted.