The Sohma Curse (草摩の呪い, Sōma no Noroi) is a "bond" between God and thirteen members of the Zodiac. Akito Sohma is the current "God" of the Zodiac, while various members of the Sohma family are possessed by the spirits of the animals from the Chinese Zodiac, including the Cat.

As told in the true zodiac legend, there was a man (later to be called “God”) who had always been alone. When a friendly cat came to visit and confessed that he couldn't help but be drawn to him and expressed his desire to stay by his side, the man was very happy. Because of his new friendship with the cat, the man yearned for even more connections, and therefore held fun banquets with the other animals (those that are considered part of the Chinese zodiac). The man, who didn't want their friendship or banquet to end, and only yearning to make his bond with his friends (the thirteen animals) last for eternities, created a spell by drawing a circle in a cup of water with his finger. This drink made sure that every single one of them would be reborn, and no matter how many times they were reborn, the bond of their friendship would remain.[1]

The Curse and The Bonds

For hundreds of years, various members of the Sohma family have been reincarnated as God or one of the thirteen animals by being possessed by their original spirits. Isuzu Sohma explains that even though they don't have any memories of the original promise between God and the animals, they are still bound by that promise, since the blood of the Zodiac spirits remembers.[2] The original God only wanted the bonds to be sacred and something that would connect him to his friends forever, but he didn't intend for the bond to become something cursed and the source of generations of abuse, isolation och ostracization in the Sohma clan.

The depiction of the original "bond".

The depiction of the current "bond".

Although there is no definite answer to what the curse truly is, Kazuma Sohma theorizes that the God and the thirteen animals are in a “world” all their own, so it’s hard for someone on the outside to understand what’s between them. They are connected by a bond of blood and the very souls of the original animals and God. This is the reason why the Zodiacs aren’t able to defy Akito, since they all harbor intense feelings toward her and since she is like a god to them; someone to be feared and respected, whether they are weak or strong. Only a few words of rejection from Akito's mouth can both emotionally and physically wound the Zodiacs.[3] For this very reason, Hatori Sohma couldn't blame Akito for blinding him, causing Kana Sohma to become sick, or making him erase her memories.[4][5] However, it is shown that the Zodiacs are able to defy Akito if their will is strong enough; Momiji Sohma defied Akito's wishes and stood up against her in order to protect Tohru Honda, possibly because his bond with Tohru is much stronger than his bond with Akito.[6]

The bond is a deep and intense emotional connection that only the Zodiacs can feel without having to do anything. For example, Kureno Sohma had a dream about a still transparent Akito when she had just been conceived, and she told him that they would be able to meet soon. Shigure Sohma, Hatori Sohma, and Ayame Sohma had the same dream and they all woke up crying and immediately reached out to Akito’s mother’s, Ren Sohma, womb, who didn’t even know she was pregnant yet. The four boys knew that their God was in there, and felt like they had always been waiting for her. Kureno also mentions that when Akito had come into existence, a part of him he didn’t know existed was crying out, and that it belonged to the voice of the spirit possessing him. He explains this spirit as another self living inside of him, as the blood of the spirit in his veins. Even if new incarnations were born, the blood of those spirits made their demand to Kureno and all the previous and current Zodiacs clear; to not betray their God. Both Kureno and Momiji could see how unnatural the bond was when their curses broke, and as a result, eventually lost their bond with Akito.[7] It also mentioned that their emotional connection is so strong that every single person possessed by an animal spirit cries upon seeing their God for the first time.[8]

Yuki cried upon seeing Akito for the first time.

The Cat is the only member of the bond who was intended to be cursed. Since the Cat rejected the idea of an eternal banquet and friendship, God and the other animals saw the Cat as rejecting and betraying them, even if his words came from a place of wisdom and kindness.[1] This is why the Cat is punished for this in each rebirth. Not only does the Cat have a “true form”, but they are also ostracized and isolated. Shigure explains that every Zodiac is well aware of Kyo’s future confinement, but none of them will lift a finger to stop it; either accepting it in silence or pretending not to think about it. The reason behind this is that the Cat fulfills the role of a scapegoat within the “bond”; he is discriminated against, disrespected, and locked up, a fate which the other Zodiacs won’t have to suffer. So when they feel self-hatred and that the bond is a curse, they can look at the Cat and think “Thank God. At least I’m better off than that.” It is also mentioned that despite how the Zodiacs acts towards the Cat, they feel superior to him deep down.[9]

The Cat's fate: to be locked up until death.

The Breaking of the Curse

When Kureno's curse broke, while the bond had previously been intact for thousands of years, those who were aware of Kureno’s situation knew that the curse was slowly weakening. Shigure in particular has many theories about the weakening curse and has stated throughout the series that he hears the sound of “something breaking”. He also had a feeling that since the current generation is the first time all twelve members of the Zodiac (including the Cat and God) are alive at the same time, the God and the animals all gathered for the final banquet. The reason why Hatori turns into a Seahorse instead of a real Dragon, and why Kureno turned into a Sparrow instead of a Rooster is also a sign of the curse weakening.[9]

Because the bond is such an unnatural thing, it has begun breaking down and falling apart, since the “blood” itself had begun weakening. Shigure also predicts that the curse will break completely in the current generation of Zodiacs’ lifetime, although maybe not until they are much older. This is because Kureno’s curse had naturally broken through time. However, thanks to the accumulation of all small changes and triggers, the breaking of the curse only began coming faster. Although there is no definite answer to what these “changes” are, it is implied to be when a possessed member form a stronger bond with an outsider or someone other than God, than the one between them and God. This happens when Tohru forms meaningful and deeply emotional bonds with many of the Zodiac members throughout the series.[9] Another “trigger” to weaken the curse could also be when a possessed member defies, stands up against, or becomes independent from God.[10] It is implied that Akito, the God, holds much control and power over the bonds and the curse. So when Akito forms a bond with Tohru; a bond stronger than her bonds with the Zodiacs, is willing to destroy the Cat's Room and let the Zodiacs have their freedom, as well as admits that she doesn't want to be a special “God” anymore, but only a normal young woman living her own life and just being herself, these actions all weaken the bond and allow it to break, once and for all.[11]

Kureno's curse broke ten years prior to the start of the story. For the rest of the Zodiacs, with the exception of Momiji and Hiro Sohma whose curses broke earlier for unknown reasons,[12][13][14] the curse broke at the same time, with only a few seconds in difference.[11] It is seen that when Kureno, Momiji, and Hiro’s curses broke, feathers surrounded them and they could sense that they had been released from the curse and their God. Akito could feel this as well, even if she wasn't present when their curses broke. Every member of the Zodiac also cried over having their curse broken. Hiro mentions that even though he should have been happy about it, he still felt anger, resentment, regret, remorse, and attachment all mixed up inside of him. Hiro's mother, Satsuki Sohma, explains to Hiro that he had lived with the “bond” his whole life; and even though he had suffered so much because of it, it had been a part of him regardless.[14] It is implied that this is the way the other Zodiacs felt as well. Yuki also mentions having his curse broken felt like saying goodbye to someone he had been together with his whole life (presumably “God” or the “bonds”).[1] 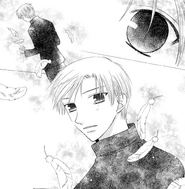 Kureno sensing that his curse broke. 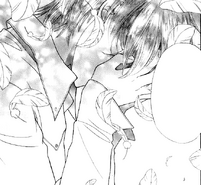 Momiji sensing that his curse broke. 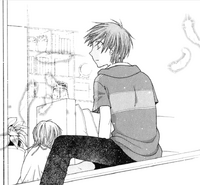 Hiro sensing that his curse broke.

Retrieved from "https://fruitsbasket.fandom.com/wiki/Sohma_Curse?oldid=68408"
Community content is available under CC-BY-SA unless otherwise noted.